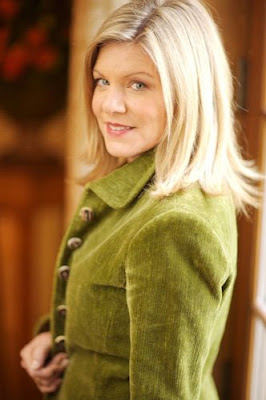 Talented designers abound in our country. Designers whose work rises to the top. Cindy Rinfret is one of these. I have watched her work through the years as it has appeared in many of my favorite shelter magazines, and I am always excited when I see a new feature done about her. 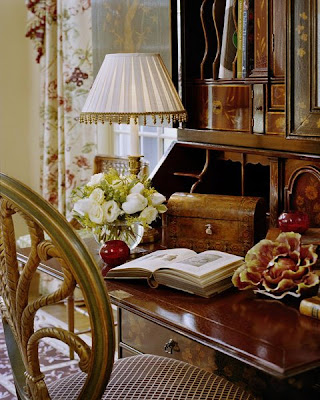 Close-up shot of a beautiful secretary. 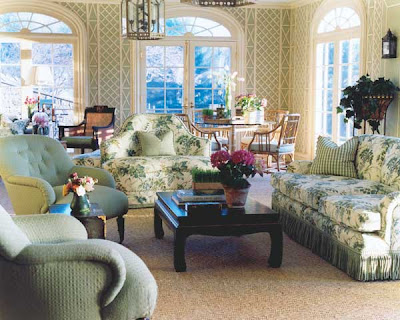 This living room sort of channels Elsie de Wolfe with the trellis-covered walls.

Cindy was educated at the Rhode Island School of Design and the Copenhagen School of Architecture. She worked in New York City before moving to Greenwich, Connecticut. It is in Greenwich that her work seems to have blossomed and thrived. Here, in one of the most affluent regions of the country, Cindy is able to work her magic not only in the more formal homes there, but also in country retreats and beach front getaways. 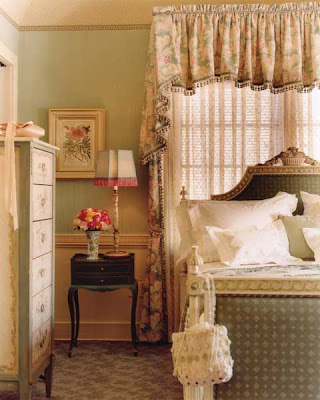 A beautiful bedroom with serene blues and greens. I love the placement of the bed at the window. Window treatment and canopy all in one! 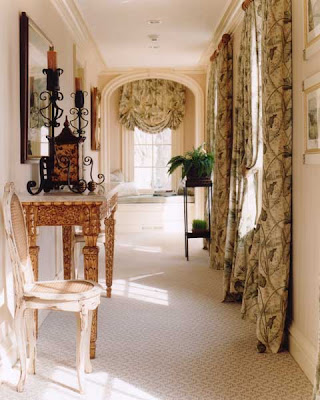 A pretty hallway with some of Cindy's signature window treatments.
Cindy's work has appeared in numerous publications, some of which are Traditional Home, Better Homes and Gardens specialty magazines such as Window and Wall Ideas, Greenwich area home magazines, as well as being featured on HGTV. A ten-page spread was done on her work in Chris Madden's Bedroom Book. She has also authored a book called Classic Greenwich Style with a forward written by the design greats Bunny Williams and John Roselli. ( Some company she keeps there!) 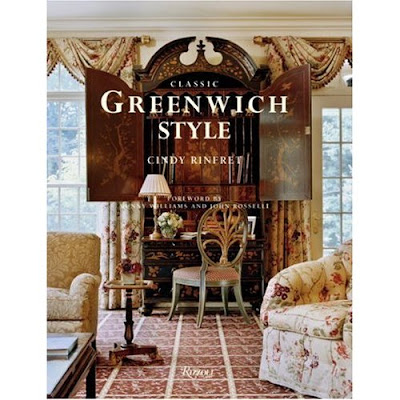 Cindy's design style is rooted in the classics. She uses fabrics in lush, creative ways and is a master at mixing color and pattern. 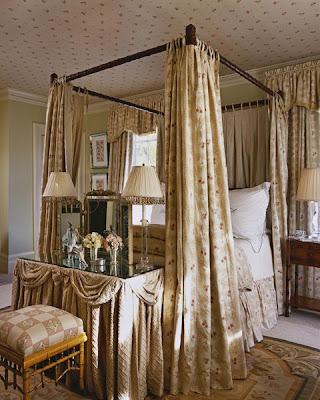 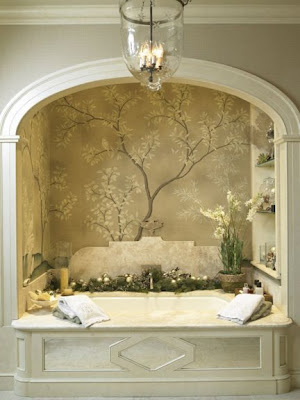 Serene bath with a sort of Swedish feel. I particularly like the tall marble backsplash on the tub.


Her portfolio shows several shots of rooms in which both rustic and classic are mixed. I would assume a lot of this work was done for clients with country houses. I like the way she doesn't let these rooms get too "themed" and cutesy. 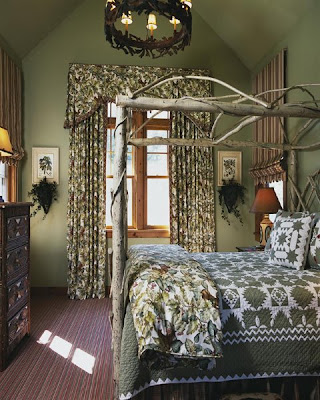 I have always been a devotee of the English country house look and Cindy Rinfret does this look well. Her rooms are layered and detailed. Rooms where families can really live. 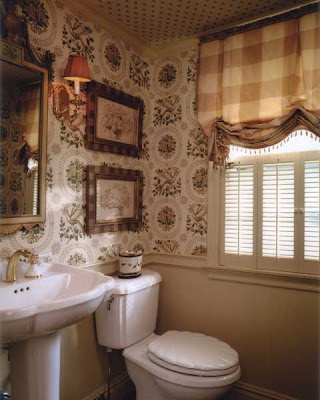 This bath is so pretty. Classic London shade and wallpaper.

When I think of the designers I most admire, it is always the ones who take the classics and make them their own. They admit they are not trying to re-invent the wheel, but appreciate tried and true forms and interpret them in an original way. 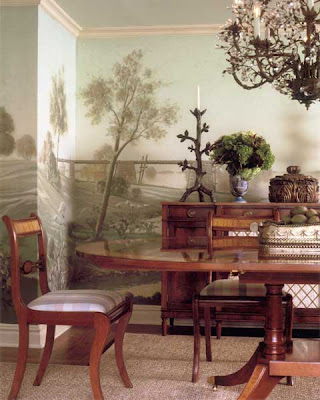 Classic furniture with a natural fiber rug to dress it down paired with rustic accessories. Hand-painted mural no doubt ties in with a country landscape outside. 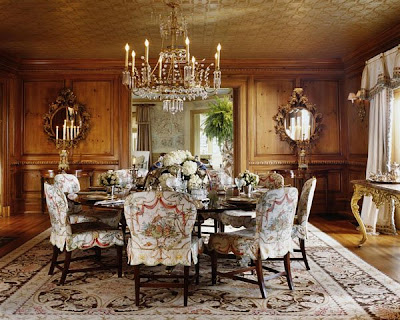 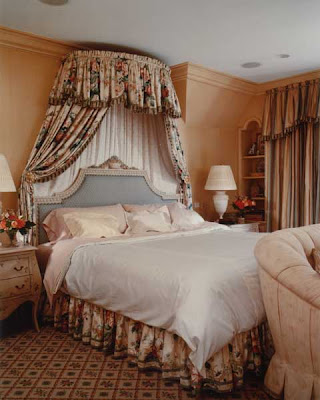 French furniture appears in Rinfret's work quite often. (Probably helps explain my love for her work!) 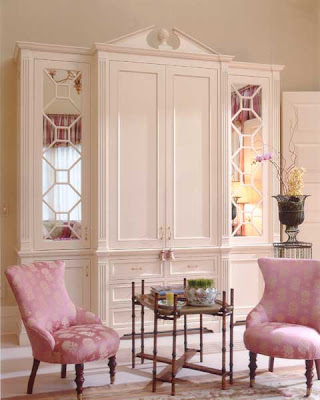 I wonder if she specified this bedroom built-in. I covet it so much! 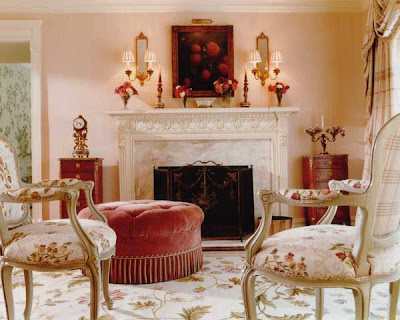 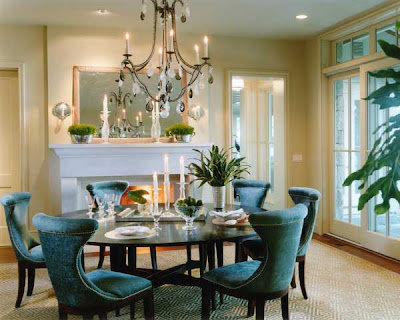 This dining room illustrates a more pared-down version of Rinfret. Still love it! 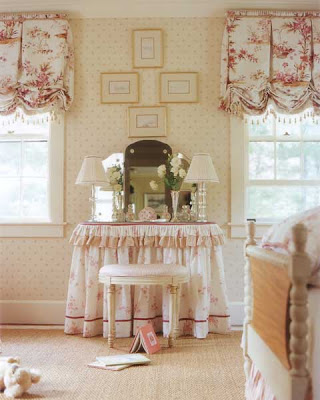 Seagrass tones down the florals for a soft and pretty bedroom. 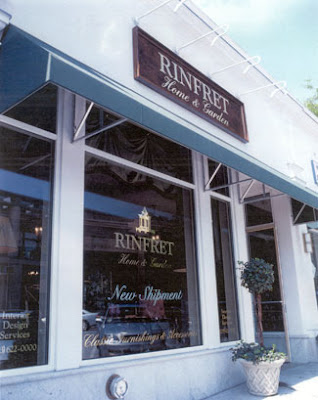 If you fortunate enough to be in the Greenwich area, Cindy Rinfret also has a retail shop. I am sure her style is evident in everything for sale here.

I hope you have enjoyed this tour of everything Cindy Rinfret. Traditional but fresh, her design style is classic and timeless.

Posted by Southern Chateau at 8:49 AM

GORGEOUS room designs... thank you for sharing! I see a painting in inspiration in that desk photo!
Bon week-end!
Fifi

The hand-painted murals are gorgeous, and the trellis-covered walls very interesting! Thanks too for visiting and commenting on Under A Paper Moon. xx

I love her designs. That book is a great one!

I love her work. Nothing gimmicky or trendy, just elegant and timeless.

Oh, my word, those are gorgeous rooms! I am going to buy that book and spend the rest of the day drooling over the photos!

The serene bath is splendid...as was reading this post. Glad you liked my spiritual and inspirational Sunday post.

WONDERFUL bathroom! I love the scenic paper in the dining room too. Can't wait to check out this book.

Thanks for your comments! I think we all seem to like that bath. I don't own the book yet either but I plan on buying it. I'll just put it in a stack with all the others! Carol

Beautiful work as always by Rinfret, Ltd! FYI the handpainted wallpaper in the bath with the "Swedish feel" is Gracie--www.graciestudio.com

Cindy is a long-time client of Gracie and always a pleasure to work with.

Thanks for including that shot!

The pictures were printed nicely and clearly.It has a glorious design that make other people envy and wanted to do more than what you post.EPSON Premium Glossy Photo Paper